Prokhorov General Physics Institute of the Russian Academy of Sciences 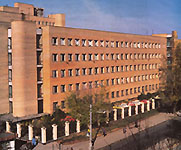 The main directions of research at the institute are as follows:

The Fiber Optics Research Center, ex-department of the institute, became an independent organization in 2007.

The institute cooperates with research organizations of 15 countries within the bilateral and interacademic conventions. Joint laboratories with scientific institutions of Canada, Italy, and France have been organized. Up to 300 foreign researchers and experts visit the institute every year.
The institute has experimental facilities making it possible to perform fundamental and applied investigations in different fields of physics. The results of these investigations led in many cases to the development and practical realization of various devices for industry, medicine, and ecology, which have no analogs in the Russian and foreign instrument making.